Until about 35 years ago, many of us had never heard of Jackson Hole with its Teton mountain range backdrop.  For being such an incedible ski destination, it was a bit off-the-grid due its more remote Western Wyoming location.  It is now considered one of North America’s top resort towns, and in the past 10 years or so Jackson Hole has invested a great deal in new lifts, facilities, and in upgrading its terrain. 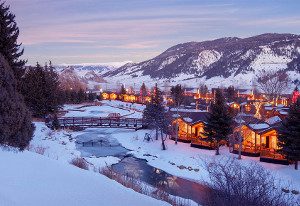 Now, Jackson Hole Mountain Resort can boast it is a totally unique vacation experience. It celebrated its half century in 2015 and is the only place where people can enjoy riding a sleigh through the herds of 10,000 elk and bison and even have to ski defensively to avoid hitting any moose that may be found on the cat-tracks.

If that’s not enough, where else could people enjoy an annual Cowboy Ski Challenge where skiers are pulled at more than 40 mph over jumps and other obstacles behind horses?

Jackson Hole Mountain Resort even has two famous National Parks for neighbors and powder snow is available in the backcountry throughout almost the entire season. As a result, the statistics say there is generally one skier per acre on the slopes.

Where? Tucked into Wyoming’s top left-hand corner, the resort is technically located in Teton Village, WY. The nearest airport is Jackson Hole, just 30 minutes and 20 miles (32km) away.  There are ample connections into Jackson from many airports, the shortest connecting flights being from Salt Lake City and Denver.

Jackson Hole Alltrans operates the Jackson Hole Express, which offers a daily shuttle to and from Jackson Hole, as well as Idaho Falls, Salt Lake City and Pocatello.  If you decide to drive from Idaho or SLC, just be safe.  The roads can get snowy in a hurry when a storm comes in, and Wyoming is known as a place with some challenging winter driving.

The area was originally called Jackson’s Hole after a Virginian trapper called David Edward Jackson. And the valley itself is 15 miles wide and 60 miles long and runs from Hoback Junction in the south to Togwotee Pass  and Jackson Lake and in the north. Wild and remote, it’s rich in animal life including coyotes, wolves and bald eagles as well as elk, moose and bison. 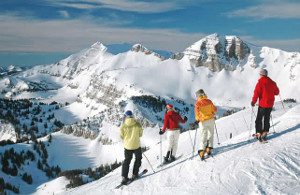 Skiing and Snowboarding. To mark the resort’s half century, the Teton high-speed quad chair lift has been added. In addition, the Piste Mountain Bistro was opened to add to Jackson’s Holes other food offerings. It joined the Off-Piste Market, a gourmet takeaway in the Rendezvous Lodge’s lower level, at the top of the Bridger Gondola.

When the ski area was opened in 1965 by Paul McCollister, he called it Jackson Hole and since then has adopted the title ‘Jackson Hole Mountain Resort’ but snow sport aficionados usually refer to it simply as Jackson. The local resort, however, is called Teton Village, and the old cowboy town of Jackson which the resort is named after is actually 12 miles to the south east.

The ski area averages around 11m of snow each winter, but like most other resorts, it has been known to experience occasional poor snow years. In the 2007/08 season, however, the resort enjoyed a record 15m of snow, which in turn attracted a record number of visitors.

A few years ago an electronic gate system was launched to enable skiers and snowboarders to get onto the slopes faster and more easily. To use, Guests can purchase a reusable J Card. To eliminate waiting in line this automatically operates the lift’s turn-styles and can be reloaded online at any time.

Another recent improvement is the South Pass Traverse between Apres Vous Mountain and the Casper Restaurant which has been re-routed and widened so it is easier to negotiate. There is also a new Crags chairlift and the resort has spent $6 million to install the Casper high-speed detachable quad so intermediate terrain can be accessed more easily. 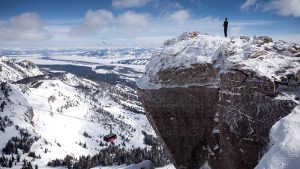 Other attractions. Jackson Hole is a charming little resort where it’s possible to pretty much get everywhere on foot. Everything you could possibly need for your holiday there is available in the village, including enough restaurants to enjoy a different kind of cuisine every night.

With its location at the base of the Teton Mountain Range, the Jackson Hole valley also offers a taste of the Wild, Wild West. The small nearby town of Jackson is an authentic historic town where moose and mule deer still roam the streets, and ranchers still gather.

Nearby, are Grand Teton National Park and the Bridger-Teton National Forest. These provide some of the world’s most spectacular alpine scenery, where a wide array of wildlife can be found, including mountain lions, marmots and even grizzly bears.

Staying there.  As both a gateway to two famous national parks — Teton National Park and Yellowstone National Park — as well as being a premier ski resort for intermediate skiers, Jackson Hole offers a wide choice of accommodations. These range from luxury lodgings with all the amenities included to approachable locally run family hotels and bunkhouses. People can also stay on the slope in Teton Village for convenience in the winter or they can book at a location downtown if they want to be immersed in the bustle of a resort town.

Because Jackson, WY is a popular and thriving year-round resort community, there are also plenty of private vacation homes available for rent.  Don’t overlook Wilson, WY, which is also not far from the Jackson Hole base area.