The ski resort of Stowe is located between Montpelier and Burlington in the State of Vermont. It is made up of two mountain areas, Spruce Peak and Mansfield. Together there are 116 trails, over half of them graded at the intermediate difficulty level. With just 16% of the trails graded as greens, Stowe is also considered a very good option for experienced skiers and snowboarders.  As of June 2017, Stowe ski area is part of the Vail Resorts family of ski resorts. 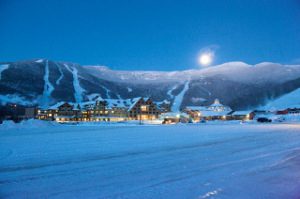 There are six freestyle terrain parks for those who are after adventure. And for keen cross-country skiers, Stowe provides four interconnected areas featuring a total of 90 miles of groomed trails winding their way through the town.

The town is idyllic. Main Street is particularly folksy and attractive. It doesn’t scrimp on luxury either. Stowe Mountain Lodge, a six story, 312 room luxury hotel and spa at Spruce Peak’s base, is regarded as one of the most environmentally friendly and top end places to stay on any mountainside in the world. The après-ski scene is lively, kicking off at just 2pm on the weekends.

Where? The address for what has been dubbed ‘Ski capital of the East’ is 5781 Mountain Road, Stowe, VT 05672. That is in north-central Vermont, 40 minutes from Burlington International Airport, the largest in Vermont, 20 minutes from Interstate 89, and less than half an hour from the local train station. 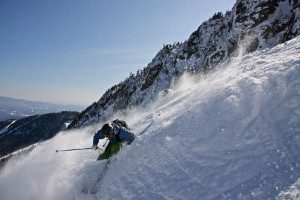 Skiing and Snowboarding. Stowe Mountain Resort offers quality skiing and snowboarding from the novice to the most experienced sports people in any family. The resort’s lift system incorporates a gondola which is able to shuttle people between Vermont’s highest peak, Mount Mansfield, and Spruce Peak, its neighboring mountain.

This inter-mountain transfer lift formally links the two by providing transport between the slopes at both the bases of Mount Mansfield and Spruce Peak. Spanning the State’s Route 108 is the Poma 10-person standing gondola.

The resort benefits from an average of 314 inches of snow a year. The snow falls over the entire 485 acres of skiable terrain and 2,360ft vertical drop. There are 13 lifts to service the 116 trails, meaning that up to 15,516 passengers can be transported uphill on the hour, every hour.

A Stowe ski vacation is particularly suited to families because it was for them the whole Spruce Peak base was designed. There is a magic carpet, and the green runs are exclusively accessed by their own two lifts. On Spruce Peak more advanced skiers and riders will find many intermediate runs and, on the mountain top, more than one black diamond.

Intermediates, are also well served by Mount Mansfield with its sustained groomers, including Gondolier and Perry Merrill. The Mansfield Base Lodge is served by chairlifts that service blue runs for intermediates to explore. Meanwhile, expert skiers and riders can access Waterfall, a gladed area just off the Gondola’s top. Those experts that are looking for bumped-out, challenging steeps can head up to Fourrunner Quad. 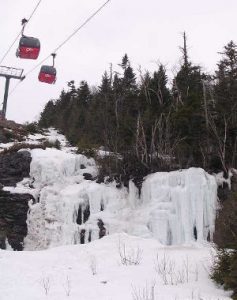 Other attractions. In the Winter season all guests at the Stowe resort can explore the woods on one of the cross country ski and snowshoe trails. There are 28 miles (45km) of specially groomed trails and nearly 19 miles (30km) of backcountry terrain.

The rental shop offers the full range of Nordic snow sport kit including snowshoes, performance skate, ski and classic ski packages, touring gear, telemark and backcountry gear. There is also a selection of children’s kits appropriate for three years and older. This selection includes small snowshoes and sleds that can be used on the sledding hill. Parents with young children can obtain a pulk sled there as well.

The Spruce Camp base lodge houses a children’s adventure center as well as a center where kids can learn to ski or snowboard.

As well as skiing and boarding there are many other ways to have fun at Stowe Mountain:

Just a few steps from Spruce Camp’s Base Lodge is a-new ice rink where with lights and music the whole family can enjoy with lots of fun and laughter.

During the Winter season there are Guided Snowshoe Tours where people of all ages can discover Stowe Mountain Resort’s outdoors in the safe hands of specialist Snowshoe Guides who are well acquainted with the area’s woodland trails, open meadows and frozen waterfalls. The twilight tour is particularly inspiring.

For those in need of a break from the outdoors but still keen to stay active Stowe offers Stowe Rocks, an indoor climbing centre at Stowe Adventure Center. For the children there is the Kid Zone, which includes a 30ft Program Wall along with the 40ft Elephant Head Rock tower.

Other nearby attractions include the Ben and Jerry’s Factory and the Green Mountain Coffee Roasters.

Staying there. Stowe is one of the most luxurious of Vermont’s ski resorts. There are a variety of high-end lodging options. These include Stowe Mountain Lodge, one of the world’s most environmentally friendly hotels, and many Marriott hotels like the Fairfield Inn & Suites Waterbury Stowe.